The Toshiba Thrive is Androids response to the longstanding domination of Apple in the tablet marketplace. From the onset Android was playing from behind and, because of this, they had to make their splash big enough to carry momentum as well as to create a fan base. The Thrive 10.1 inch model is the one I will be reviewing today. Android hit their market on almost all cylinders, so let’s take a look at what they have done well more specifically.

Before diving into the technical features of the machine let’s take a long glance at the aesthetics of the model. The Thrive is an easy to grip device that fits perfectly in a backpack. The machine itself is a cool black and the whole device has a sleek sheen to it. The screen is vibrant and can obviously take a beating though it does tend to smudge a little bit. The power switch is on the top of the unit with the appropriate headset jacks there as well. The Thrive also has a nonslip rubber back plate which should provide a lot of comfort to the more clumsy tablet owners out there.

Now looking past the aesthetics let’s dive into the technical aspects that bring the Thrive AT105 to the forefront of the tablet market. The first thing to point out is that the Thrive is powered by Android 3.1, or Honeycomb, and runs brilliantly and as smooth as any other handheld Android device. The Thrive also packs quite a gaming punch with its integrated NVIDIA Tegra 2. This is the world’s first mobile super-chip. Where Apple falls behind is in the world of Flash and other visual components; both of which the Thrive supports. The AT105 is also powered by the NVIDIA GeForce. Gaming will not be a problem on this machine. The processing power is pretty intense. 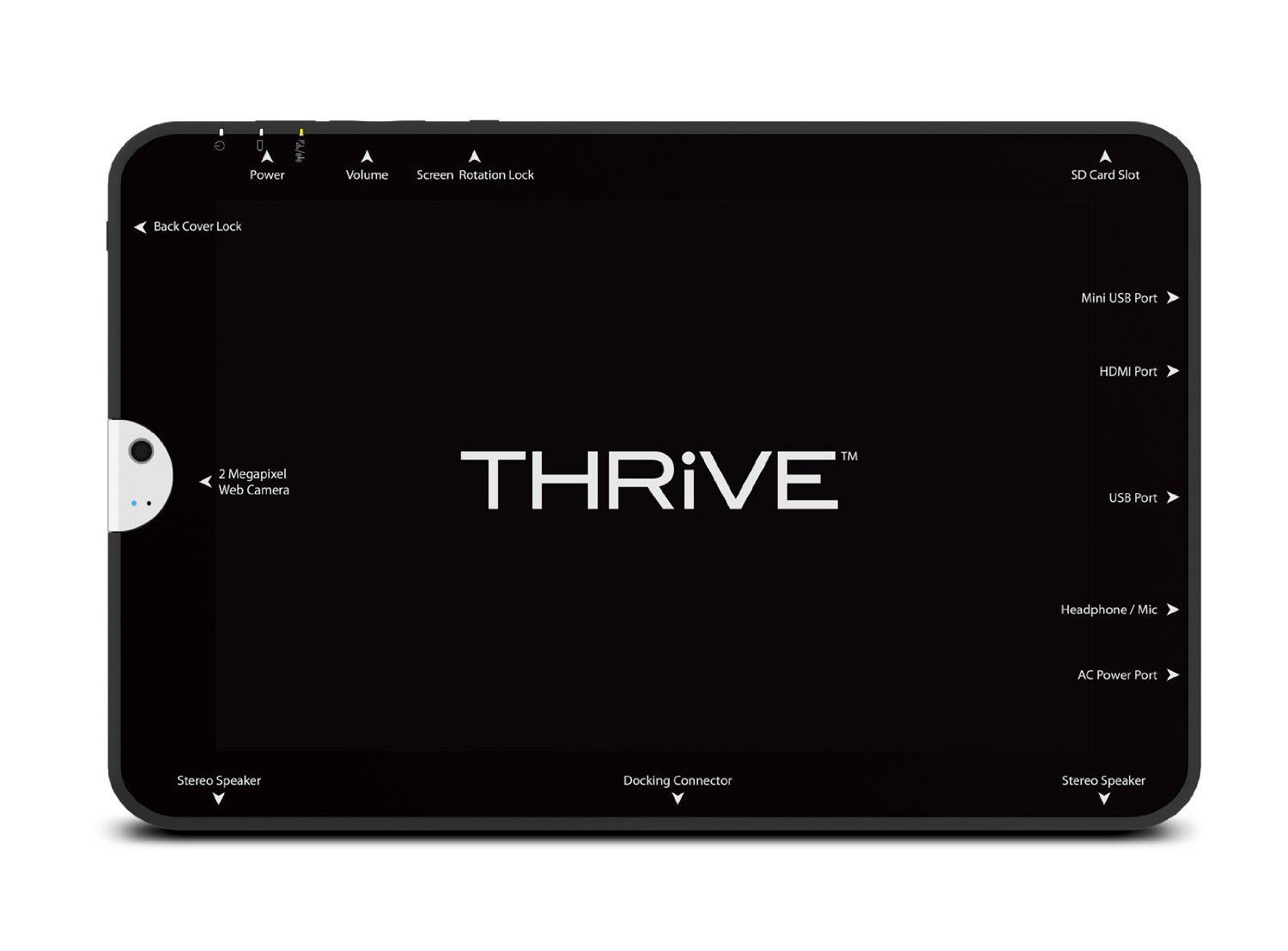 For those of us not into gaming on our tablets the device also has an array of other utilities to maintain its usefulness. The AT105 has a set of cameras each with their own specific usage. The rear camera records at 5 megapixels and offers users the ability to photograph and film in full HD, up to 720P. The front-facing camera records at 2 megapixels which is powerful enough for a clear and beautiful picture. For laid-back entertainment, the Thrive utilizes these cameras in the Social Media world (think: Twitter, Instagram, Facebook) and also has usability for video viewing and even reading. Connect your streaming video account to the tablet and take that enormous library with you wherever you have a WiFi connection.

The Thrive AT105 is a fully portable entertainment experience, and its networking abilities support this. The tablet offers full HDMI support, a pair of USB drives, a mini USB, and a standard size, along with an SD card slot to boot. This is probably the biggest area that Android and Toshiba are excelling in comparison to the other Apple juggernauts (the iPad and the iPad mini). The full support for HDMI and a full-size USB connection makes this a tablet more powerful and flexible than any other.

So it is easy to see why the Toshiba Thrive is gaining so much steam in the tablet marketplace. The device offers full functionality, unrivalled gaming power in Tablet formation, and flexibility to put other units to shame. The Toshiba Thrive is the perfect mobile gaming device for the hardcore gamer while still offering functionality to those that would rather just relax with their device. The Thrive comes in 9, 16, and 32 gig sizes.